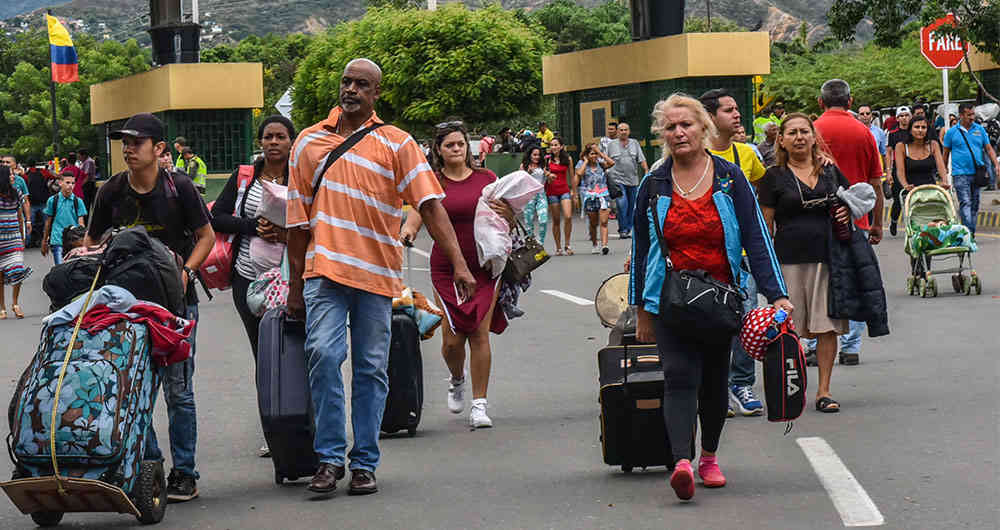 To think of the here and now we must not stop preparing for tomorrow. We must understand that people’s urgent problems require answers today, and that those answers cannot wait for the resolution of a political crisis that we do not know when it will arrive.

In the last six years, our country has suffered the largest drop in per capita income seen since 1950 in Latin America – and one of the largest in the world. By the end of this year, we will have lost two-thirds of our 2013 Gross Domestic Product, a collapse equivalent to three Great Depressions in the United States.  Poverty has tripled and almost a sixth of the population has left the country.

The factors that triggered this crisis are clear.  Between 1999 and 2013, Venezuela experienced the biggest oil boom in its history.  However, only a very small portion of that income went to real savings or investment.  The abundant oil revenues concealed a sharp drop in the economy’s productivity, as a result of growing restrictions on the private sector and a marked institutional deterioration. When oil prices plummeted in the middle of this decade, we were not prepared for such a negative economic shock.  And when they began to recover a few years later, Venezuelan oil production had fallen so much that the country had lost the capacity to produce the external income necessary to sustain its economy.

Not everything, however, is economics. As the economic contraction spread, Venezuela also began to sink into a political and legitimacy crisis. Added to the instability and associated uncertainties were the effects of actions taken by the international community to try to contribute to democratic change in the country. The country was being plunged into a growing international and economic isolation that contributed to further deepen the decline of our economy.

Given that the origin of the crisis lies in the combination of mistaken economic policies and the collateral effects of the political crisis, it is natural (and correct) to think that a definitive solution to the economic crisis requires a solution to the political conflict.  It is only when we have elections that are recognized as free and transparent by the international community that the economic renewal necessary to take the route of prosperity becomes possible.  Precisely as a result of this reflection, teams of our best specialists have dedicated themselves to thinking about what we should do «the day after» the political transition.

The pursuit of political change does not detract from the struggle to achieve incremental improvements relevant to the people.

The problem with that approach is that, as our country has learned firsthand in recent months, the solution to the political crisis is complex and elusive.  We all want a solution, but that doesn’t mean we can reach it soon.

Different groups of Venezuelans have different and conflicting ideas of what solution they want, and many of these ideas require collaboration by internal or external actors that cannot necessarily be relied upon.

An example taken from theoretical economics can be useful in understanding how to deal with this dilemma. I am referring to the distinction, coming from the welfare economy, between optimal global solutions (first-best) and specific optimal solutions (second-best).  According to this literature, if you can attack all the distortions in an economy, you have access to the optimal solution. (first-best). However, there are many cases where such a solution is not achievable.  For example, when a market is under the control of a monopoly, the optimal policy is to force the breakdown of the monopoly.  If that cannot be achieved, it is best to apply the second-best policy. (second-best) to use regulatory power to restrict monopoly actions.

The Oil Foundation for Venezuela starts from the diagnosis that, although much attention has been paid to the problems of the day after, this has led us to neglect the study of the here and now. We think that the identification of the second best policies is an exercise at least as relevant as the search for globally optimal policies for our country.

National governments are by no means the only way to solve collective action problems.

We emphasize that both reflections are necessary; precisely because of this, forgetting either of them can have a high cost for the well-being of Venezuelans.

Thinking about the here and now requires a different way of approaching some of our problems.  The questions are no longer those of designing an optimal public policy plan to be implemented by a future government.  Instead, emphasis is placed on initiatives that can be implemented given the current political environment and lack of technical control over the formulation of national economic policies.  In the Venezuelan context, we must also assume that there is little likelihood of convincing de facto powerful authorities to adopt efficient economic policies on their own.

To think about the here and now, it must be understood that national governments are not far from being the only way to solve problems of collective action.  The space for collective action always exists when there is a multiplicity of actors. Organized civil society, social and political movements, local governments, the international community and – in the particular case of Venezuela – the government recognized as legitimate by more than fifty countries – are all vehicles through which responses that are not conditioned to the resolution of the political crisis can be promoted.

Labour movements in advanced economies learned a key lesson throughout the 20th century: you don’t have to change the political or economic system to make improvements in people’s lives.  If they had not understood this, they would never have fought for the reduction of working hours, the abolition of child labour, or the right to social security. Most social movements around the world are organized around concrete goals and focus on defending the rights of their members and communities.  The pursuit of fundamental political change is a laudable goal, but it in no way detracts from the struggle for small changes that achieve incremental improvements relevant to people.

For those who struggle daily to survive, without today there is no tomorrow, and without present there is no future.

Concrete examples taken from today’s Venezuela clearly show that efforts can be joined to improve the lives of Venezuelans in the here and now without waiting for a solution to the political conflict.

The mobilization of international assistance to the migrant population and the acquisition of portable electrical equipment with the help of multilateral entities show us two cases in which actors other than those in power actually joined forces in concrete actions that make an enormous difference in the lives of thousands of Venezuelans.

To think of the here and now we must not stop preparing for tomorrow. We must understand that people’s urgent problems require answers today, and that those answers cannot wait for the resolution of a political crisis that we do not know when it will arrive. It must be decided to give priority to addressing the needs of the most vulnerable groups least able to withstand the onslaught of protracted conflict. It must be understood that, for millions of Venezuelans who struggle every day to survive, without today there is no tomorrow, and without the present there is no future.

*Francisco Rodríguez is founder and director of the think tank Oil for Venezuela.

Leave us your comments below and we will contact you.